Tightening the Law on Using a Mobile Phone Whilst Driving

In 2017, the government increased the penalty for driving using a mobile phone from 3 to 6 penalty points and an increased fine. For New Drivers this will result in licence revocation and for other drivers will still have serious implications.

This has not resulted in a significant drop in mobile phone use for drivers and the police have stepped up efforts to ensure these offences can be detected including having officers observing from a higher viewpoint on buses and in HGVs, as well as using laser static cameras at road junctions. Members of the public have been encouraged to report their own photographic evidence of offenders, as we saw with David Beckham.

Last year, the High Court clarified that mobile phone use at the wheel was only an offence where there was an element of interactive communication, which predominantly includes calls, texts, transmitting data and using map functions. In this case, it was held that it was not an offence to use the video function, although doing so could be evidence of a more serious offence.

In response to the case, DfT have been keen to ensure that the tough stance continues. Grant Shapps, Transport Secretary, stated that an urgent review would take place to tighten up the laws around mobile phone use. This could include using any function of the phone or even holding the phone, whilst driving, a criminal offence. The proposals are expected to be announced in Spring 2020.

If you would like any advice regarding a mobile phone prosecution, call our team today 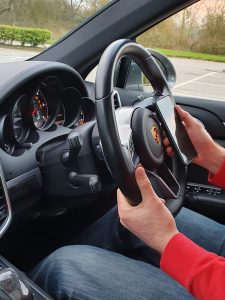 This entry was posted in Motoring Law and tagged driving offence, lawyers, motoring solicitor, sbcmotoringlaw, using a mobile phone. Bookmark the permalink. Follow any comments here with the RSS feed for this post. Post a comment or leave a trackback: Trackback URL.